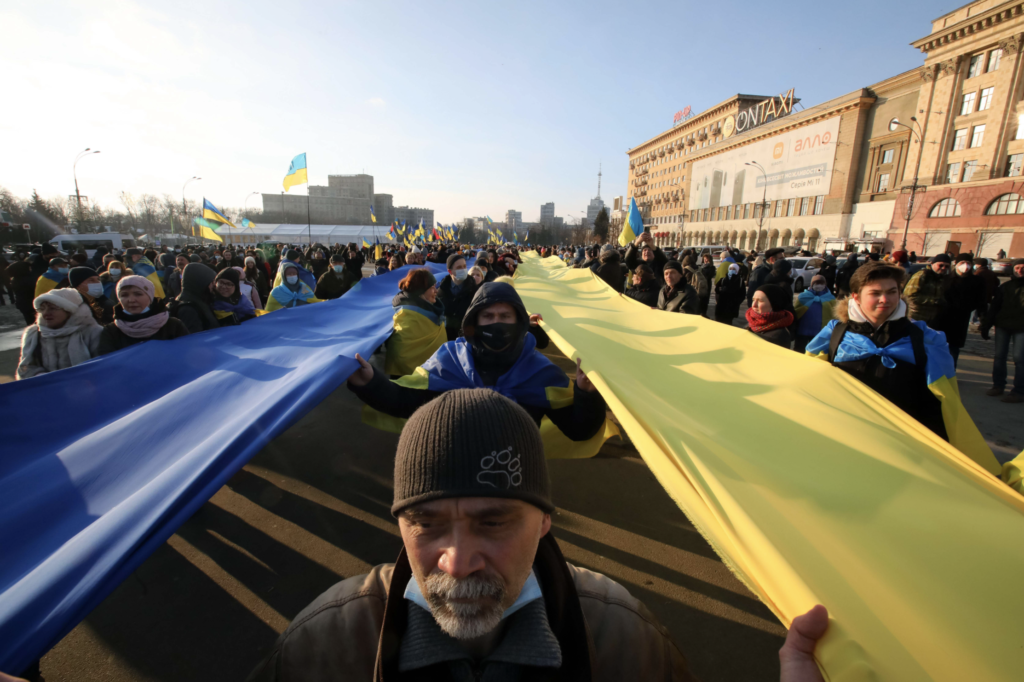 Glenn Ansley is an International Mission Board (IMB) missionary in Ferrara, Italy. The following is a first-person testimony of his experience working to manage the ongoing Ukrainian crisis.

The first interaction that I ever had with Ilya Danilyuk was over a WhatsApp voice message. We were trying to coordinate a time to meet in a small town in Italy, and while I don’t remember much about that interaction, it was obvious to me that this man was exhausted.

You could hear it in his voice.

Originally from Ukraine, Ilya and his wife, Svetlana, accepted an invitation to come to Italy as missionaries to displaced Ukrainian families in 2011. Over the past 11 years, a growing network of healthy evangelical churches have planted Russian and Ukrainian speaking congregations in multiple cities from Naples to Milan.

Although Ilya and his family are familiar with the demands of serving displaced populations in a foreign country, there was a season in which they made the 300-mile trip from Naples to Florence every week to help a new church find its footing. Despite this, Ilya has still never been as busy as he is right now.

Like so many other Ukranians, Ilya told me that he never believed Russia would actually invade Ukraine—even up until the moment it happened on February 24, 2022. Ever since, Ilya has been working hard to balance his pastoral duties with organizing efforts to find food, housing and medical supplies for the estimated one million Ukranians that will enter Italy this year.

It’s a grueling undertaking, but one that Ilya says the Lord is using to bring people to Himself.

Thanks to the help of Send Relief and the thousands of believers that have donated money in the United States, I was able to spend two days with Ilya and his family in April. The purpose of the trip was to help him purchase much-needed food, medical and hygiene supplies. As is often the case in trips like this, however, the Lord blessed me through this Ukrainian community far more than I could have ever anticipated. Here are seven truths the Lord impressed on me during the course of my trip—I’m hoping to pass them along to you as a reminder that God is at work during these difficult times!

God’s sovereignty was a consistent theme in all the stories that Ilya shared with me. It would be very easy to become ungrateful and lose faith in the goodness of God as one witnesses all the evil and the destruction currently taking place. The Ukrainian church, however, is choosing to focus on the sovereignty of God and to confess His goodness despite the evil around them.

Acts 17:26 says that the Lord has determined the allotted periods of our lives and the boundaries of our dwelling place. Ilya told me that he and his wife had to pray diligently about their future in Italy last fall after a bout of sickness that led to a hospitalization. Although he didn’t know why at the time, Ilya said he never had a peace about returning to his home base in the United States—even when it seemed like the more sensible choice to make.

He is certain that the Lord’s conviction for him to remain in Italy was directly related to God’s sovereign plan. When I got off the train, Ilya introduced me to two young men who were recent arrivals. Because these young Ukranians had been working and living in Russia before the war, they weren’t allowed back into Ukraine—even though it also wasn’t safe for them to remain in Russia. Through the Lord’s guidance, these believers found their way to Italy and are now serving the Ukrainian church there. In the two days that I was with them, they repaired the engine of a large van that will be used to transport supplies to the Ukrainian borders and bring refugees back to safety. Ilya points to this as God’s sovereign hand during the crisis. God is at work across Europe and around the globe, despite what’s happening on the ground in Ukraine!

Directly related to God’s sovereignty, the war in Ukraine is advancing the gospel on two different fronts. On the one hand, the evangelical church has been growing in Ukraine for many years. Now, with the displacement of so many people, the church of Jesus is spreading into other, more secluded areas. One of the things that I appreciate most about Ilya’s approach to crisis response is his commitment to the delivery of the gospel through the local church. All of the supplies are going directly to the evangelical and Baptist churches still ministering within the war zone. While the food and medical supplies are of immense humanitarian value, their eternal value is immeasurable. The gospel of Jesus is being delivered to hospitals and shelters in a war-torn land.

Ilya also explained to me the amazing work of God that he’s witnessing among non-believing Ukrainians fleeing to neighboring countries like Italy. In the past, his evangelistic efforts probably resembled what you and I are accustomed to where we live as well: street evangelism, visitation, Bible studies and personal relationships. Now, however, Ilya reports that he doesn’t have to search for the opportunities. Rather, the Lord is sending truth seekers to him in droves! He shared that when families leave their husbands and fathers in a warzone, travel for days in miserable conditions and arrive in his city to find hospitable believers opening up their homes and sharing their food, their hearts are softened in ways he’s never seen before. He doesn’t have to invite them to church anymore—they ask him when and where they can meet! The gospel is advancing amongst the Ukrainians, both inside and outside their war-torn country.

Another amazing truth that I couldn’t shake is how important the global church is to God’s plan. I was able to make this trip and purchase supplies because thousands of believers in America are donating to Send Relief in response to the war in Ukraine. I was available to make this trip because thousands of churches and believers in the United States are supporting my family as we live and serve the Lord in Italy through the IMB. Furthermore, I was capable of making this trip because of the local Italian church. These Italian believers have been pouring into my family for more than three years now, as they’ve taught us language, culture, perseverance and faith. When I arrived, Ilya’s wife and his church took me into their homes. They fed me lunch and dinner and told me countless stories of how their network of Ukrainian churches is responding to the crisis.

Churches across the globe are faithfully serving the Lord in a way that brings honor to His name, hope to the hopeless and eternal life to those who are far from God. The global church is essential to God’s plan. You are essential to God’s plan—even as He works thousands of miles away from where you live and work.

When I called a good friend back in North Carolina on my way home, I think I was looking for a way to decompress and debrief after all the stories that I’d heard. He told me that he just doesn’t hear much about the war anymore outside of the news cycle, and, while I understand what he’s saying, I can tell you that the Ukrainian community is distraught more than you or I could ever imagine.

You and I can experience this war through our televisions and our computer screens. When we turn those off, we move on to dinner, work and family life. Ilya, his church and millions of other Ukrainians are experiencing this war through personal loss and word of mouth. Televisions and computer screens aren’t important to this community because the news travels through text messages and dinner conversations. We leave our devices and the Ukrainian conflict to re-engage in life while millions of Ukrainian believers around the world are experiencing conflict as a way of life. For them, it’s constant chaos and despair.

During a break from shopping, Ilya and I went inside a gas station to pay for our fuel and grab a quick coffee, leaving his wife inside the van. When we returned five minutes later, she informed him that a previous member of their church—someone who had accepted Christ under their ministry—was just killed. It was devastating to watch them look for information on social media and messaging apps. Ilya tried to call the young man’s wife—now a widow and single mother of four young children—but she didn’t pick up. This is the context that Ukrainians are living in right now. We all know that this war is devastating, but I’m here to tell you it’s far more overwhelming than we can imagine.

Ilya, his wife and I spent two days shopping together. As we loaded his van with five carts of food and supplies, he told me about all his plans for the food. I was struck by how quickly it would all disappear. By the time you read this, most of the food and supplies we purchased will have already been distributed.

Ilya told me that he had a hard time managing the offers to help at the beginning of the war. They received so much clothing that he had to ask people to stop donating. Now however, as we are more than two months into the conflict, support is dwindling and their network of churches are having a harder time meeting all of the needs. The donations have slowed down, but the refugee numbers continue to grow.

Please pray that the global church would continue to shower organizations like Send Relief with prayers and donations, and pray that local churches would be intentional in using this great need for humanitarian relief to spread the gospel.

The need for prayer shouldn’t surprise any of us at this point. However, Ilya helped me to understand several areas where we could pray more specifically for the church.

The greatest truth that I took away from my time with Ilya is that justice will be served. Although governments and humanitarian groups continue to seek resolution and explore the use of words like “war crimes” and “genocide,” the evidence of unjust and incomprehensible crimes continue to mount. It is very easy, within this context, to question the presence and existence of a good God. The Ukrainian church, however, understands that even the acknowledgement of unjust war crimes speaks to the evidence of a just God.

We, as children of God, know that every immoral act, every unjust killing, every lie and manipulation, will one day be made just by the King of Kings. For those of us who have put our faith in Jesus’ death and resurrection, He has already paid the penalty for our unjust deeds. If the war in Ukraine teaches us anything, it should remind us of the extent of our own depravity and, by contrast, demonstrate the immense nature of our holy, just and loving God.

As I reflect on the opportunity I was given to visit this church, I am heartbroken for the pain and suffering that millions of Ukrainians are currently experiencing because of sin and corruption. At the same time however, I’m encouraged by the love of the global church and the faithfulness of Ukrainian believers in southern Italy to shine as a light in this time of darkness.