Two weeks after Hurricane Maria struck Puerto Rico, Félix Cabrera and his wife, Denisse, arrived to visit the island where he was born and deliver aid in the aftermath of the storm. Cabrera thought he was just there to help in a time of need, but God was already working on something more.

“God convinced us that He wanted us to return to the island to help in this new church planting movement,” Cabrera said.

“I confess that the feeling is bittersweet,” wrote Cabrera in a blog post announcing the transition. “On the one hand, we are happy to contemplate what God wants to do in Puerto Rico, but at the same time we are very sad because we are leaving our church family.”

Cabrera left Puerto Rico in 2010 for Oklahoma City where he started Iglesia Bautista Central (IBC). As pastor of IBC, Cabrera helped found the Red 1:8, which has planted 35 churches across North America, in Latin America and in Spain. The ministry of IBC has been designed to multiply, and their church has ordained and sent over 15 church planters and pastors.

Cabrera, who also currently serves as second vice president of the Southern Baptist Convention, will return to his hometown of San Juan in late December, where he will plant a church and a serve as the North American Mission Board’s (NAMB) church planting catalyst on the island. 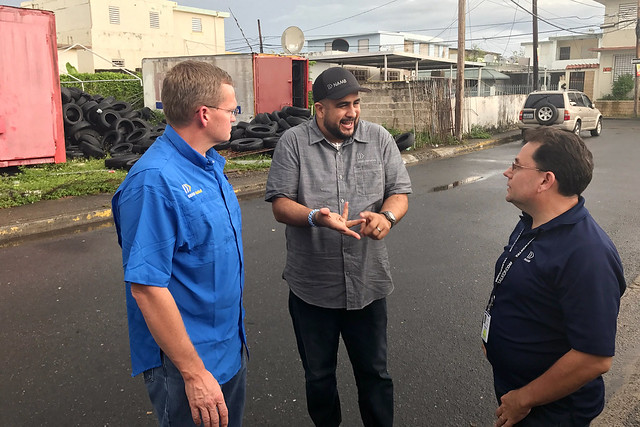 Four church planter apprentices and their families plan to relocate with Cabrera as well, with a goal for each of them to plant their own churches over the next 18 months.

As NAMB continues to develop its Send Puerto Rico emphasis it is infusing new energy and resources into church planting efforts and enhancing compassion ministry work through Send Relief. Several Puerto Ricans who had established lives on the mainland have been answering the call to return home to be a part of ministry on the island.

“We are incredibly excited to be a part of what God is doing in Puerto Rico,” said Kevin Ezell, president of NAMB. “Some amazing leaders are stepping up to serve the island, and NAMB is honored to get to provide the training and resources necessary to equip them for ministry.”

Carlos Rodriguez, NAMB’s Send Missionary in Puerto Rico, stated that a church planting pipeline is already under development and that eight to ten leaders should be ready to plant churches in the next 18 months.

“God is bringing us key people to help us bring church planting and Send Relief to a new level,” Rodriguez said.

For a glimpse into the life of a church planter in Puerto Rico, see this online feature from On Mission Magazine.

“Churches have been involved in working and coming,” said Rodriguez. “We have seen [mainland] churches develop partnerships with church planters.” Those partnerships lead to lasting involvement and ministry.

SBDR teams with the Southern Baptists of Texas Convention worked diligently to establish the Seminario Teologico Bautista (Baptist Theological Seminary) as the center for recovery efforts in the aftermath of Maria. The seminary housed hundreds of volunteers in the following months.

In June, NAMB purchased the seminary from the Convention of Puerto Rico and U.S. Virgin Islands in order to develop the property into a Send Relief Ministry Center. The center will become a hub for continued recovery efforts in the short-term as well as house resources in preparation for future relief efforts.

According to Jonathan Santiago, NAMB’s Send Relief Ministry Center coordinator in Puerto Rico, the long-term plan will be for the hub to serve communities through all of Send Relief’s focus areas: poverty, refugees and internationals, foster care and adoption, human trafficking and crisis response.

Santiago, who previously served 11 years as the evangelism and partnership coordinator with the Baptist Convention of New York and NAMB, expects that the compassion work will fuel church planting work.

“We know that there are great opportunities to plant churches across the island,” he said. “I want to make sure, that as we serve Puerto Rico, our intention is to serve people so that we can see people come to Christ, and we can plant new churches.”

Cabrera and Santiago both grew up in Puerto Rico and came to Christ as the sons of Southern Baptist preachers. The two bring a passion for reaching the island with the gospel.

“As a Puerto Rican, my heart was with my people [after the hurricane] and having family there even more so,” said Santiago. “As a believer, it was more than just wanting to be there with my people. It was also knowing that in the midst of crisis and vulnerability, people are open to the gospel. I wanted to have the opportunity to share Christ with people.”