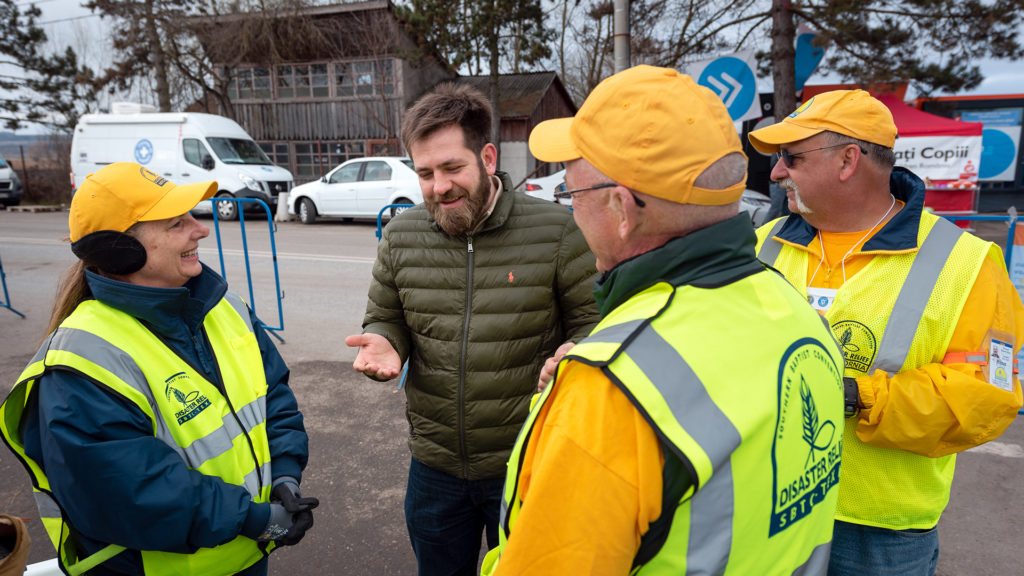 Editor’s note: This story contains descriptions of war violence that some readers may find disturbing. The descriptions are from one refugee’s account to Southern Baptist Disaster Relief Team volunteers. We do not have a way to contact him further.

Overcome with emotion, Iaroslav covered his face and the torrent of tears with one of his hands. His other held a piping-hot cup of coffee. At the border of Romania and Ukraine, Southern Baptist volunteers provided this Ukrainian man from the decimated city of Bucha with a listening ear, a message of love and a prayer for protection.

Iaroslav pensively walked down a corridor of humanitarian tents, waiting for a caravan of cars carrying his company’s employees. He stopped for a cup of coffee at the station Southern Baptist Disaster Relief and Send Relief teams established. A team of Southern Baptists from California, Missouri and the Southern Baptists of Texas Convention manned the station, offering coffee, snacks, reading glasses, Bibles and QR codes leading to a gospel website developed by the IMB.

“I can’t believe you’ve come all this way to do this,” Iaroslav told volunteers.

“God sends us because He loves you,” Terry James, a Southern Baptist responder, answered.

With these words, Iaroslav’s green eyes overflowed with tears that landed on his green quilted jacket. Crows made short and circuitous circles around the humanitarian tents, their caws ominous and a harbinger of the news that would soon emerge through Iaroslav’s testimony and news outlets. Disaster relief team members were present to hear the stories before Bucha made the world news.

Iaroslav began sharing with James, who is from King’s Trail Cowboy Church in Whitewright, Texas, that some of his neighbors in the city of Bucha, outside of Kyiv, were surviving in his basement. He said corpses, severed hands and other body limbs are on the streets and in bombed homes. Some Ukrainian residents of Bucha were living with the dead bodies of family members, unable to bury them, and unable to leave their homes.

A charred body of a Russian solider lay 500 feet from Iaroslav’s house. He turned his phone to show a photo. Much of the footage from Bucha is so gruesome, news outlets are not posting photos of the atrocities.

Iaroslav’s neighbors told him Russian soldiers were looting houses, taking everything of value inside. One couple, who had also evacuated to Bucharest, heard their home was looted and then incinerated when a grenade was thrown into the house.

Iaroslav explained to James that communication was patchy because when Russia occupied the city, they took cell phones and computers. He said the Russian soldiers would enter the homes and break the devices.

Food and other necessities could not be delivered because of the gas shortage and Russian occupation.

One of Iaroslav’s friends was not able to evacuate. He told Iaroslav that troops entered his house and demanded money, and if he didn’t comply, they would rape his wife and daughter. The family eventually escaped from Bucha because he took the pressure out of his tires so that they would appear flat. Russian soldiers slashed holes in cars with full tires, rendering them useless. Because his tires were still usable, Iaroslav’s friend was able to drive his family to safety.

Though safe physically, his five-year-old daughter is scarred emotionally. The friend told Iaroslav the child screamed as their bus passed bodies askew in the streets and charred vehicles.

Another neighbor was not able to leave the city. During an attack on their vehicle, the wife was killed, and the grandmother was injured and cannot walk.

Iaroslav said Russian troops kept residents in the city as collateral – knowing the minute civilians were gone, Ukrainian artillery would drive them from the city.

Compassion seemed to be a salve to stave his gaping wounds.

When asked to travel with the disaster relief team, James said she’d love to, but she needed to pray and talk with her husband. The night after James received the invitation, a tornado came through her town, blowing through their barn but sparing their animals. Her husband was not home at the time.

“I told my husband, the Lord protected me through that, and He can protect me through anything,” James said. The day after her arrival, she met Iaroslav.

James and Russ Wise prayed for Iaroslav. Wise attends Vertical Church in Yuma, California, and he partners with Pathways Church in Santee, California. Wise has served in disaster relief for 10 years, and he says he is on speed dial for the California Baptists’ disaster response team.

“I asked God to give Iaroslav strength, thanking God for him getting not only his family, but his employees and their families, out,” Wise said.

Iaroslav brought 15 cars out in a caravan and moved 70 of his employees and their families to Bucharest.

“He’s had the weight of his world on his shoulders trying to get everyone to safety,” Wise said. “I thanked God for his safe travels and for continued healing for him and his family. I’m a veteran, I’ve been in wars, but I haven’t seen what he’s seen in just a month.”

News of Bucha made headlines on April 2 and 3 as Russian troops retreated and Ukraine took back the city, unveiling the curtain that hid the horror. James and Wise now have a face to go with the headlines.

“When I go home, I will still remember the people that I talked to and those stories. When God brings you to my mind, I will pray for you,” James told him.

Iaroslav thanked the volunteers before he walked away from the station in the frigid borderland between a country under attack and a country with arms and hearts open and ready to serve.

“The Ukrainian people will fight. The international support, your support, people like you, really inspire us, give us power to resist,” Iaroslav told the volunteers.

Your giving to Send Relief continues to be a critical need. In addition to a comforting cup of coffee, you are providing life’s necessities for thousands of hurting people today and most importantly, an opportunity for people like Iaroslav to hear the life-changing gospel of Jesus.

Caroline Anderson writes for the IMB.